Here is a roundup of reaction to his comments.

Matthew Harwood
@mharwood31
.@ClawsonOutsider: "Just as your capital is welcome here to produce good-paying jobs in the U.S., I'd like our capital to be welcome there"
Jul. 25, 2014

Billiam
@billiams
Also, why does @ClawsonOutsider’s staffer look so happy about the outcome? Did he not know either?! http://t.co/lKZuxcqEFt 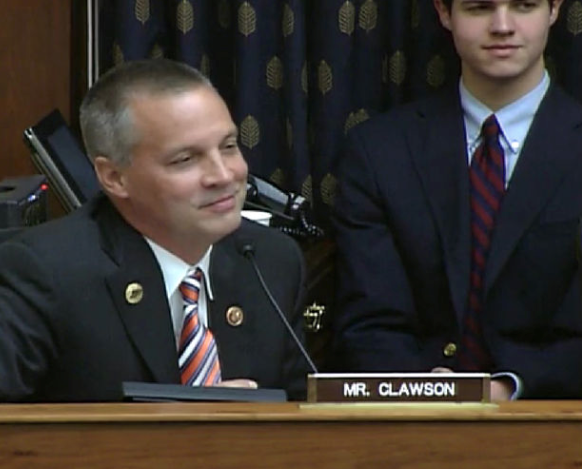 EJK
@EdwardJohn
Turns out @ClawsonOutsider is such an outsider that the refers talks about US officials as if he were outside the country. #YourCountry
Jul. 25, 2014

Scot Isom
@The_icepoet
@ClawsonOutsider Curt Clawson thinks he can be a representative in America. He doesn't know an American when he sees one. #floridawatchout
Jul. 25, 2014

I continue to be floored by the level of ignorance of our elected officials. How does someone this ignorant end up in Congress?Curt Clawson sorry for nationality gaffe

Michael Jee
@MichaelJee
Florida Rep. @ClawsonOutsider is either inept at his job or thinks all #POC are foreign. Maybe both. The people of #FL19 must be proud.
Jul. 25, 2014

Enough with the idiotic Basketball Metaphors .... and what's with the lame excuse about not being "fully briefed"? Whose fault is that? Who hired your staff? “I made a mistake in speaking before being fully briefed and I apologize. I’m a quick study, but in this case I shot an air ball,” Rep. Curt Clawson (R-Fla.) said, according to USA Today. Read more: http://www.politico.com/story/2014/07/curt-clawson-mistakes-staff-indians-109391.html#ixzz38Wn5fUciCurt Clawson sorry for nationality gaffe

What a maroon: "In an intensely awkward congressional hearing Thursday, freshman Rep. Curt Clawson misidentified two senior U.S government officials as representatives of the Indian government. The two officials, Nisha Biswal and Arun Kumar, are Americans who hold senior positions at the State Department and Commerce Department, respectively. Although both Biswal and Kumar were introduced as U.S. officials by the chairman of the Asia and Pacific subcommittee, Clawson repeatedly asked them questions about "your country" and "your government," in reference to the state of India. "I'm familiar with your country; I love your country," the Florida Republican said. "Anything I can do to make the relationship with India better, I'm willing and enthusiastic about doing so."Exclusive: Freshman Congressman Mistakes Senior Government Officials for Foreigners

Amy_Etkind
@Amy_Etkind
@ClawsonOutsider Were you in the bathroom when those UNITED STATES OFFICIALS were sworn in and introduced? #idiot #maddow
Jul. 25, 2014

justin priebe
@trustypriebe
@ClawsonOutsider Great job on improving the relationship with India. You really showed them whose boss.
Jul. 25, 2014

Powered by Platform for Live Reporting, Events, and Social Engagement